Leavin’ on a jet plane 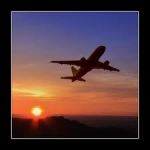 I’m not really leaving on a plane and my bag isn’t packed yet, but as I ready myself, my home, my kids, & my life for the next round of surgery, I find the lyrics to that song running through my head. Peter, Paul & Mary; Janis Joplin; and John Denver all recorded versions of this sappy little love song, with its catchy yet insidious chorus that will get stuck in your head for half the day if you’re not careful. It’s meant to be an ode for lovers, and I’m usually immune to sappy stuff and odes, but with the big surgery rapidly approaching, I must be going soft because this goofy tune is reminding me how hard it is to leave my family, endure a nasty procedure, and be cooped up in a hospital room. I am a terrible patient. No truer words have been written.

I have written a lot about what a terrible patient I am. Not that I won’t do what needs to be done to get to where I need to be in this “cancer journey” but that I hate every minute of it. I’ve also written my fair amount of scathing posts lately about stupid things people say, so I won’t go there now, but suffice to say if you were planning on telling me that at least I’ll be getting some rest, or to enjoy being waited on, you can skip it. I don’t like to rest and I really don’t like having someone wait on me. As a determined two-year-old might say, “Me do it.”

As terrible as I am as a patient, though, I’m ready. I’m at the point in which I’ve prepared all I can, and whatever doesn’t get done will just have to wait. I’ve been a busy little bee lately,

feathering my nest and gearing up for what I know will be a hideously gross surgery followed by a long recovery. This process is akin to getting ready for vacation: at first the list of things to do seems miles long, then time ticks on and the list is whittled, and then you become exhausted from and sick to death of all the prep and can’t wait to just get going. While I’m not exactly going on vacation (!), I am done with all the prep and ready to just get going.

I still haven’t watched the video consultation that explains and illustrates the surgery I’m having tomorrow. Maybe I’ll just use my imagination. You know it’s a big deal with you get 12 pages of pre-op instructions, followed by a 3-page alphabetized list of medicines to avoid.

One of my instructions is to shower with Hibiclens, an antimicrobial wash, for 3 days prior to surgery. No problem. You know what a germaphobe I am. Some of the other text from the informed consent section of the paperwork made me laugh out loud, especially the parts about who’s not really a good candidate for this surgery: women who require more complex breast reconstruction (what’s more complex than this surgery??). Women who are good candidates are those who have inadequate chest wall tissue (me); those who have concerns about breast implants or tissue expanders (I wasn’t too concerned but my body apparently is); and those who may have contracted a post-surgical infection. Yep, that’s me.

The literature then goes on to explain that infection is very unusual after surgery. Yeah, maybe for some people. And that patients must inform the doctor if she has any other infections, “such as ingrown toenail, insect bite or urinary infection.” A bug bite? Really??Oh, mercy, if only it were that simple. How I would love to say I have an ingrown toenail instead of a mycobacterium fortuitum.

There’s also a lot of scolding in the section on bleeding: “Increased activity too soon after surgery can lead to increased change of bleeding and additional surgery. It is important to follow all postoperative instructions and limit exercise and strenuous activity for the instructed time.” Yeah, yeah. Blah, blah, blah.

Yesterday was a near-perfect day: I had a few hours at home to get things in order, then on to Beauty Envy to get the hot new shellac manicure. It’s supposed to last a couple or three weeks without chipping; we shall see. I’m not going to be doing any manual labor anytime soon, so the prognosis is good. Got my toes done, too, which is always nice. Even though my toenails are short as can be, they still take a mighty beating from tennis, but they are pink and shiny now. After the nails extravaganza, it was off to lunch to enjoy the sunshine and margaritas in the company of some first-rate girlfriends–a trifecta for sure. You can have your acai berries and super elixirs; for me, there’s nothing more fortifying than the sun on my face and a drink in my hand with my friends.

Today will be equally good with my last tennis drill of the season, then lunch with whichever members of the team are game for a little noontime tippling. I also gotta make a quick belated birthday meal for my dad, who recently turned 75 but looks a decade younger, easily (I’m hoping it’s genetic, but not very optimistic). I’m whipping up pastichio (Greek lasagna) and a pineapple upside-down cake, two of his favorites. He’ll be ferrying the kids to and fro and keeping up with Macy’s near-constant stream of chatter, so he’ll need a good meal.

Speaking of Macy, she’s at it again: leaving me a note to find when I least expect it but am most likely to need a little pick-me-up. She’s a little apprehensive about me going back for more surgery, but the long summer of me and revolving hospital door must have toughened her up because instead of being sad she’s curious (which hospital? how long will you be there? can we come visit?) and stoic. 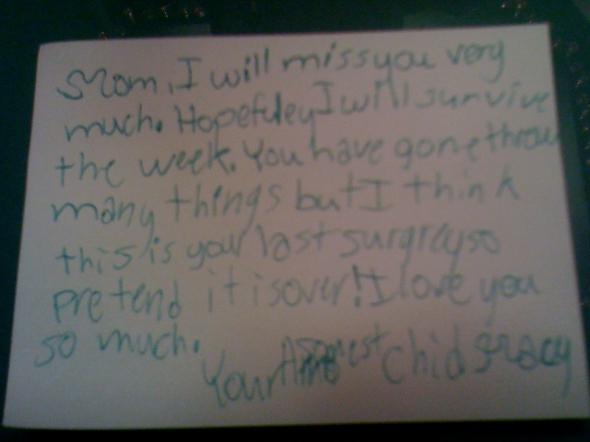 She needs a little work on the spelling (I assume that “Your asomest chid” means “Your awesome-est child”) and “Hopefuley” she will keep writing without regard for menial details like spelling. Most important is the message: if Macy says this is my last surgery, then I can go into it with a clear mind and a happy heart.

So the latest food trend is (drumroll please). . . pie.

There’s a lady in Houston named Bella-Katherine Curtis who believes that nothing says love quite like a pie. The smell of a peach pie hot from the oven, made by mom’s or grandma’s hands, is a little slice of heaven, she said.

“There’s a joy knowing that someone made it just for you; someone loved you enough to make it,” said Curtis, owner of My Dee Dee’s Pie Shoppe. “It’s special. That’s what pies do. Cake is good but there’s something very special about pies.”

She’s right. And it’s about time pies got their day in the spotlight. Any monkey can make a cake from a mix and slap some canned frosting on it, but a homemade pie is special. Yes, you certainly can buy a crust and dump a can of gelatinous filling in it and call it done, but that’s not a real pie.

I grew up on homemade pie, and anyone who’s read this blog has heard me wax poetic about how great my mom’s pies were. Her coconut cream pie is the ultimate comfort food for me. Good day? Have some CC pie. Bad day? A piece of CC pie will make it better. Promotion? You earned a piece of CC pie. Car wreck? CC pie will help.

Barb’s coconut cream pie was the real deal. Homemade crust (duh), made with flour, crisco, salt, and ice water. That woman could whip up and roll out a delicious pie crust faster than I could find the recipe in my cookbook.

I have perfectly good thumbs & forefingers, and I can certainly pinch crust between them, but mine never, ever looked like hers.

She made a lot of pies. Anytime she hosted a dinner party (which was often), the dessert would be pie. Anytime she went to a potluck, she’d bring a pie. Usually two. Any family gathering featured, you guessed it, Barb’s pie.

She gave me several pie-making lessons, and I did not excel. She would tell me to handle the dough lightly; too much or too firm and the crust wouldn’t be light & flaky. Frankly, I’d settle for light or flaky, without aspiring to both.

In her absence, I have tried to take over the pie-making. While I wouldn’t say it’s been an epic fail, it’s not been overwhelmingly successful, either. One Christmas Eve I attempted the old standard cherry pie. The crust was fussy that day, and the filling overflowed in the oven, so the finished product looked as if I’d dropped it from a tall building. If I hadn’t been so busy crying and cussing, I would have taken a picture, which I could then post here so everyone could laugh at me and that pitiful pie.

Curtis opened her pie shop in October 1992, rolling out 29 pies on her first day in business. Guess what? she sold them all. Today she’s known as “The Pie Lady.” My mom is smiling about that right now.

Anyone who knows anything about pie knows it’s all about the crust. Curtis says that crust is literally the pie’s foundation. Good pie bakers know that without a good crust, pie is a waste of calories.

“When you bake a pie you have to make a crust and take care of it,” said Curtis whose crust is her mother’s recipe. “Then, of course, you have a filling. There are many steps to pie, and it can make a big mess in the kitchen. It’s a lot more challenging than making a cake. It takes more work. But it’s worth it. A pie says more.”

But Curtis worries that old-fashioned pie baking might become a lost art. “In another generation it might be totally lost,” she said. “There are so few people out there who make scratch pies.”

Read about how much better she is than I at making pies here: http://www.chron.com/disp/story.mpl/life/food/7386674.html