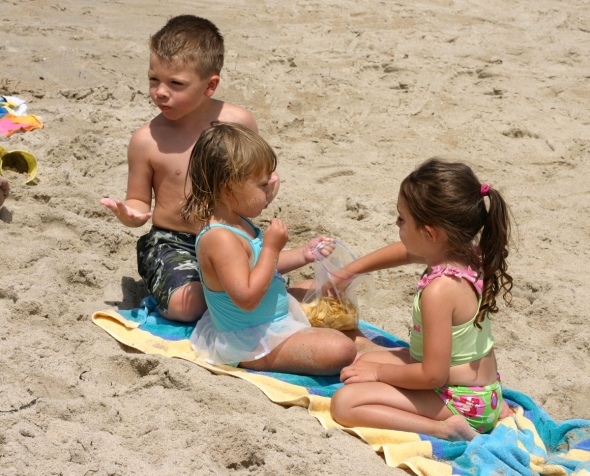 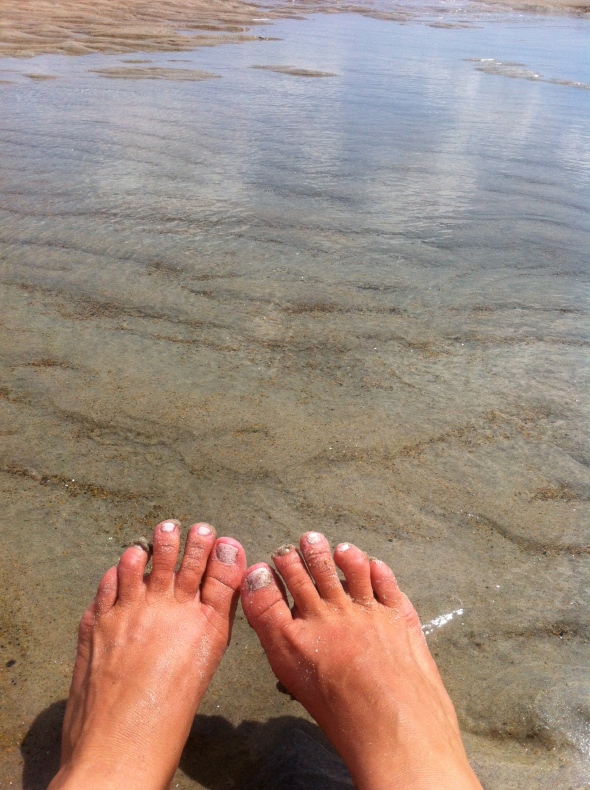 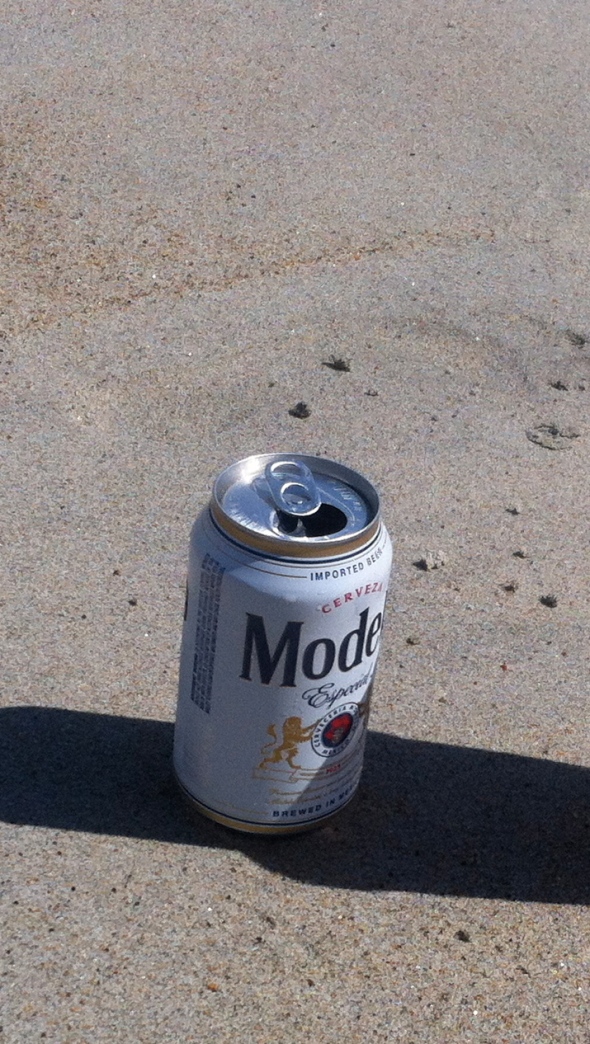 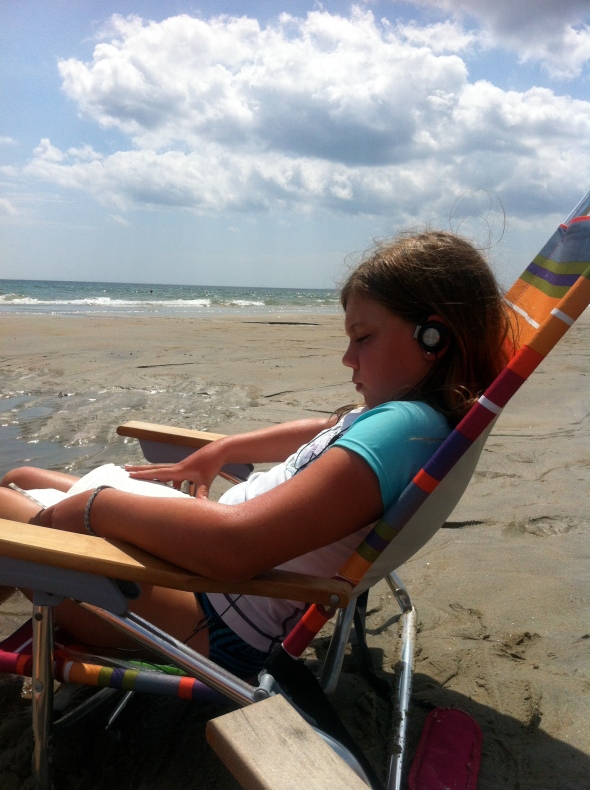 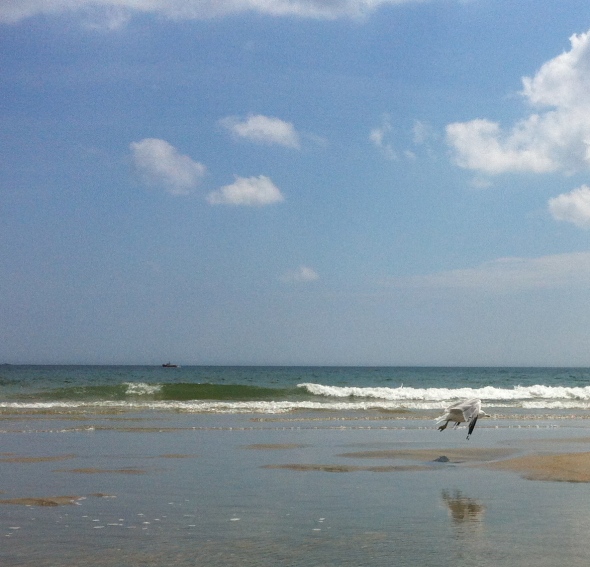 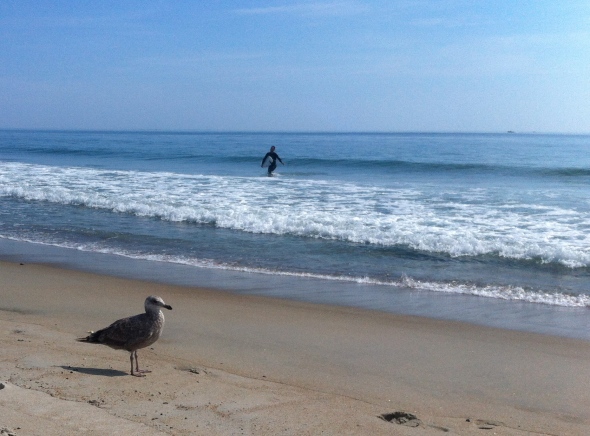 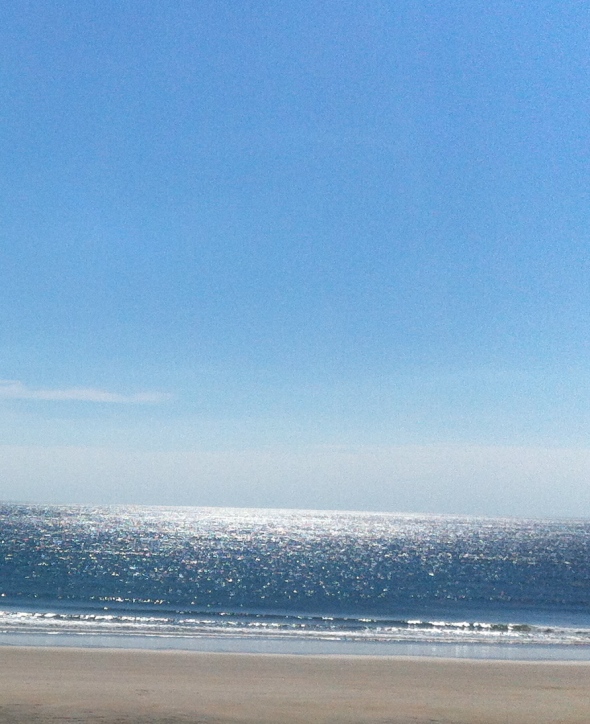 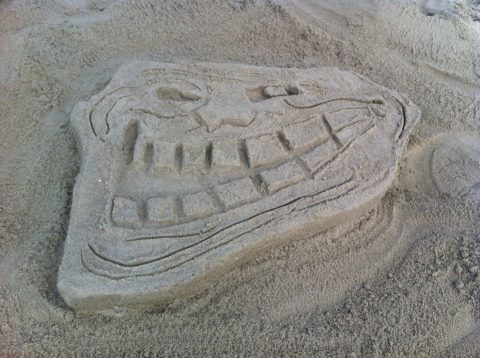 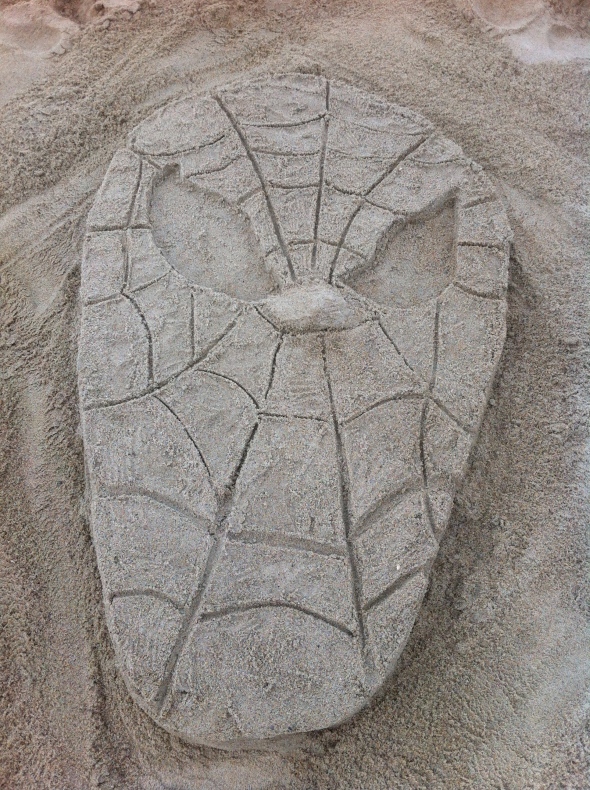 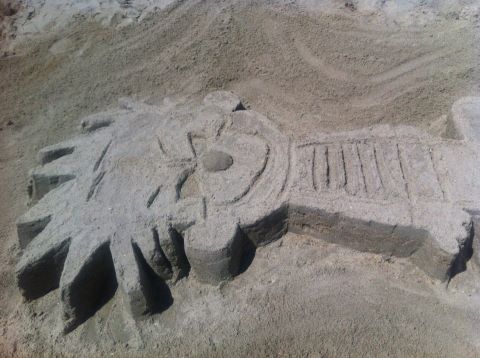 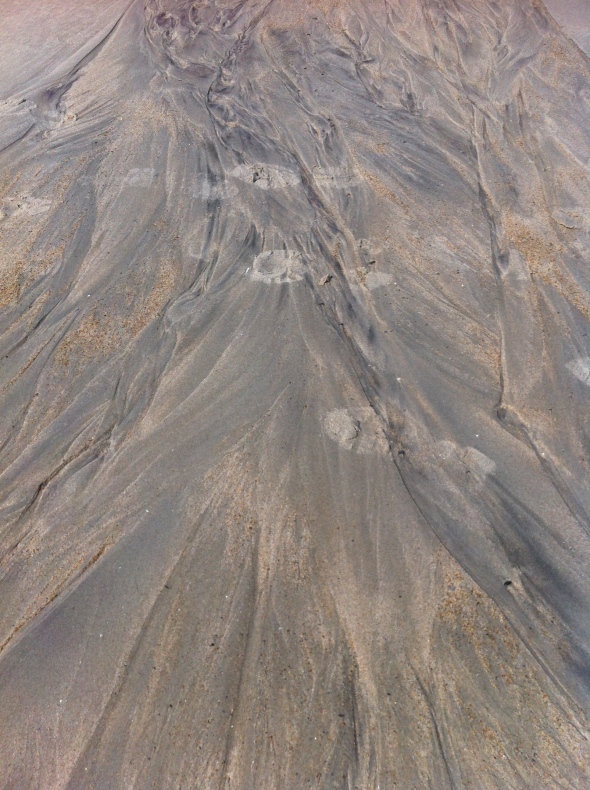 It’s been a week since we landed on Salisbury Beach, and truth be told, blogging has not been in the forefront of my mind. I’ve been much too busy lying on the beach, listening to the ebb & flow of the surf, to think about this little blog. The weather has been incredible. There, I said it. At the risk of upsetting the weather gods and bringing to a halt the glorious sum and sumptuous warm temps, I’ve said it. good weather is not always a sure thing on an East Coast beach, unlike the relentless sun and heat in Houston.

We’ve spent the last week in beach-bum fashion: sunning ourselves, chatting, reading, eating, and drinking. Moving little, caring only about the status of the tide and the direction of the wind.

This beach is a restorative place, whether you need a respite from a workload or from the rigors of putting life back in order after a disruption such as cancer. As sure as the tides will flow in and out is the restoration that comes from this place.

Watching my children frolic in the waves, feeling the cold Atlantic surf on my feet, and smelling the salty air are integral to the restoration that is taking over my soul. Another 10 days of this, and my soul will be restored. . 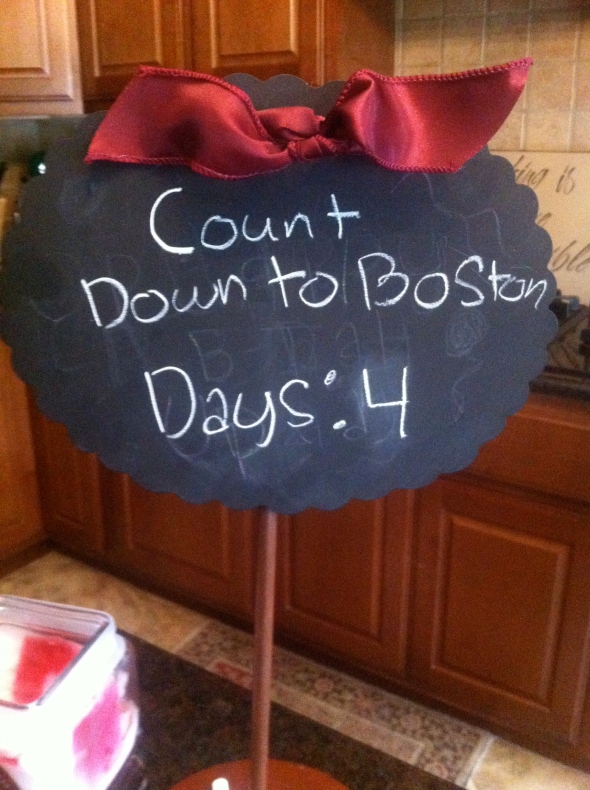 We leave tomorrow, bright & early, for our annual trip to Salisbury Beach. I. Can’t. Wait. My bag is packed, I’m ready to go. My favorite girl made a count-down sign and has been packed for a week. The two male members of this household have yet to pack but will throw trunks & toothbrushes in a bag at some point today. Between now and our 6 a.m. departure tomorrow, a few important things need to happen, including one last swim as I attempt to hit my goal of 800 meters before I let myself go completely to pot on vacay; delivering a birthday gift to our favorite 18-year-old (happy birthday, Alexis!); and one last cooking club gathering tonight with some of my besties. We’ll toast the waning of summer while sipping bubbly in the pool.

My math may be off, but I think this is our 9th year to make the beach trip. Two summers ago, I was benched by the heinous post-mastectomy infection. Missing the trip was as tough as the ordeal that caused it, and I’m still in do-over mode. I usually invoke a 10 a.m. start time for drinking on the beach, but in true do-over fashion, I may just relax that rule and say anything goes in the beverage-consumption department.

The beach trip is always special and much-anticipated for many reasons: spending time with our surrogate family, escaping the brutal Texas heat, lounging on the beach, eating lobster, and going to Fenway Park for a Red Sox game or two. The trip has taken on additional relevance for me in the wake of a health crisis, because it signifies the light at the end of the tunnel and the reward for making it through the really rough stuff. It symbolizes a return to normalcy after a hellish span of time.

The bittersweet part of this year’s trip will be leaving our little piggie behind. While she would be a fun addition to our beach party, the logistics of getting her from here to there and back again are too stressful — for her and for us. She’ll be in good hands, though, with Keely the piggie-loving pet sitter. We stocked up on provisions for our little piggie, so it will be business as usual for her as she fills the hours in between breakfast and dinner.

On the way home from Costco, with a half ton of produce in the backseat, I saw this car and smiled to myself. I viewed the whimsical paint job as a harbinger of good things to come: fun, carefree, colorful days in the sun, surrounded by the people I love the most. I couldn’t help but notice the placement of the Modelo billboard just beyond the St Arnold’s Brewery tie-dye car as I prepared for our big trip–that’s some good karma right there.

This beach trip will be full of all of our favorite things, and we’ll have the added bonus of sharing our favorite beach with none other than Amy Hoover, my medical sherpa, and her 3 boys as they make the long journey home from Maine. Salisbury Beach is right on their way home, so we’ll rendezvous on the beach. How fun!

We’ll be doing a whole lot of this

and some of this 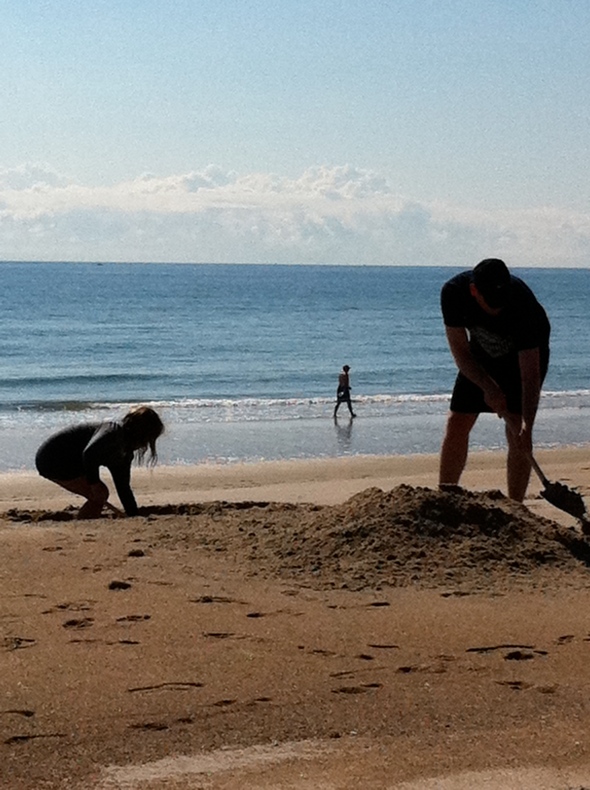 with a little bit of this 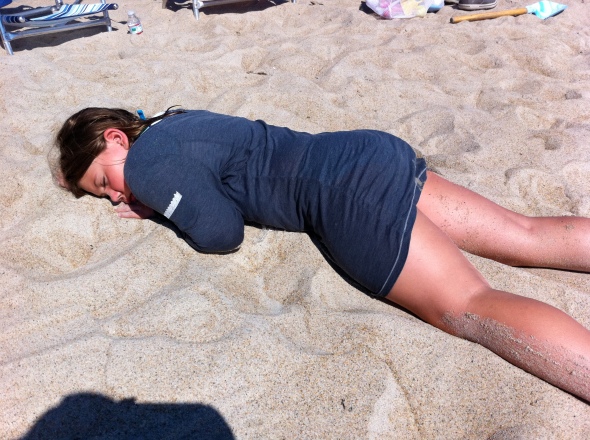 and a pinch of this 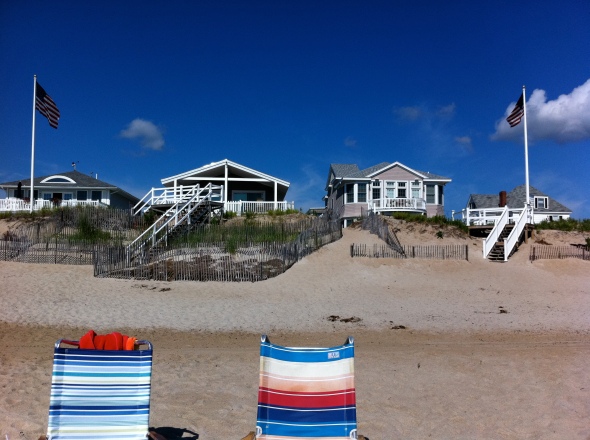 and of course, a healthy dose of this.