Stop the ride: I want off!

Was it really just yesterday that I blogged about how I rarely have trouble coming up with a topic about which to blog because my medical life is such an extreme cluster? Yes, I believe it was. Is it weird to quote yourself? Hope not, ’cause here goes:  “…the topic du jour is dictated by the most recent medical flare-up, break-down, or blow-out. Sometimes there’s an embarrassment of riches in the complication department.”

Really??? Ya think? I especially like the “flare-up, break-down, or blow-out” part. I really appreciate a good turn of phrase, even when it’s describing my own hot mess.

Although I would love to parlay this instance into a new career as Madame Z, the all-knowing and all-seeing teller of fortunes, I know I’m not prescient. Oh how I wish I were, and I could see how this complicated tale would end.

I got some news yesterday that well, for lack of a better word, sucks. Just sucks. This week has not been good. I could blab on about all the reasons it’s not been good, first and foremost my own deranged impression that by this point, 3 weeks post-reconstruction, that I’d be on the mend and getting back to my normal life. Hahahahahahahahahahahahahaha. So funny. So deranged. So sad.

I won’t keep you in suspense, although the childish side of me thinks if I wait a little longer to spill this bad news, it won’t be entirely real. There is a moment of suspending the two worlds, the wished-upon-a-star-for-best-case-scenario and the hard-core, cold reality of bad news crashing through some already pitifully low reserves of cheer and optimism. That moment before speaking or publishing the reality of the latest bad news is precious, as it allows me to believe for just a moment that in this 50-50 shot, the odds may finally turn out to be in my favor. I’ve had some statistically unlikely things happen (cancer diagnosis at age 40, no family history, post-mastectomy infection), and I’d like to think that the great karma wheel is spinning my way.

But alas, it is not.

The news of my latest pathology report tells me that the giant karma wheel is not only refusing to spin my way, it’s come unhinged and is crashing toward me.

Smoosh me now, great wheel. Just get it over with.

The week began with a needle aspiration and the culturing of fluid to confirm or deny my suspicion that the infection was presenting itself. Dr Spiegel held out hope that these symptoms were just part of the normal healing process after a long, complicated reconstruction surgery. She wasn’t around this past summer for the infection saga.

The pathology confirms that I have a MRSA staph infection. In addition to the mycobacterium that is my ongoing nemesis. If you feel so inclined to learn a bit more about these bugs that make me want to cuss nonstop and invent new ways in which to curse and rant, just click on one of the handy links. If the text is a color other than black in this workspace, you can click it and get all the info you can hold on whatever fascinating topic is at hand. Today the topic is bacteria, followed closely by cussing and sticking one’s head in the oven.

A staph infection is sucky enough, but an MRSA is worse. It’s drug-resistant and hard to treat. The mycobacterium is very drug-positive (like me) and not hard to treat, but hard to kill. It moves slowly and reproduces slowly, so it doesn’t often avail itself to the stream of antibiotics entering its domain every 12 hours. The drugs keep coming, but don’t break through very often. Hence the need for the long-term antibiotic regime. 225 days long and counting. It’s also hard to tell if it’s cured. The best way to tell seems to be stopping the antibiotics and waiting to see if the symptoms appear.

I’m still waiting to hear what my infectious disease team plans to do about this latest development, but suspect it will involve adding either vancomycin or zyvox to my minocycline & bactrim habit.

No, we don’t know where this staph infection came from, if it was contracted during surgery or was already there. I think it was already there. Way back in July, when the post-mastectomy infection hit the fan, before the mycobacterium was diagnosed, many cultures were run. Myco is very hard to diagnose because it’s so slow-growing; it can take 6 weeks to present in a culture. By the time it’s diagnosed, you can be all better or really sick. I was really sick.  I did have a staph infection at some point this summer, so it’s possible that this is the same one and it’s been lurking around waiting for a good opportunity to become more of a nuisance. Statistically speaking, it would be crazy rare for one person to have contracted not one but two infections during surgeries, but stranger things have happened. I don’t know enough about infections to know what the relationship is between the staph and the mycobacterium: do they travel together or is one opportunistic, presenting itself when its predecessor has already set up shop?

What I do know is that the new infection is a coagulase-negative piece of junk that not only makes me feel bad physically but also worries me. A lot. I try hard not to borrow trouble and to keep the “what ifs” at bay, but adding a new infection to an already crowded field makes me worry. And the fact that the new infection is creating physical symptoms in my newly created breast is very worrisome. Dr Spiegel spoke on Monday of worst-case scenario being the need for a simple outpatient procedure to excise infected tissue, clean and debride, and stitch it up neatly. She said the biggest downfall there is that it creates another scar.

Uh huh. Yeah. As if I’m worried about another scar.

Rand McNally would love a chance to copy the lines and tracks and planes that the scars have created on my chest. Any my belly. And even my poor little belly button. Sweet little belly button was just minding its own business when it was callously sliced off and stitched back on in a new location. Poor baby.

So suffice to say, another scar is the least of my worries. And having been down this road before, I know that there’s nothing simple about excising and debriding infected tissue. Especially when that tissue has already been sliced & diced, carved and stretched and pulled practically into nonexistence.

I really hope I don’t have to do that again.

Last summer, in the heart of the infection mess, I’d had it. I was done. I didn’t think I could take any more. A cancer diagnosis and a bilateral mastectomy 3 weeks later followed by a nosocomial infection was too much. 23 days in the hospital, 3 additional excision surgeries, and more missed opportunities of summer fun and precious memories that I care to recount here.

What a load of hooey.

I’m gonna have to invent some new cuss words. 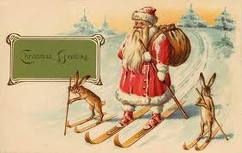 I’ve been a pretty good girl this year. I’ve smiled at fussy babies in checkout lines at HEB. I did my time at the grade-school class parties (not my scene, to say the least). I called the collection agency back — yes, I really did — when they left me a message saying I owed money on a past-due hospital bill that my insurance company says has been paid. I donated nearly-new clothes & home goods to charities multiple times. I helped out with the school fundraiser, even though I really, really, didn’t want to. I’ve said please and thank you and bring my own bags. I was a big girl and good sport about all the trips and baseball games I missed this past summer.

And while we’re on the topic of this past summer, dear Santa, do ya remember all the hell I went through? It all started on April 27, 2010, when I was diagnosed with breast cancer. Talk about an “aha” moment. The timeline quickly unfolded like this: the rest of April and first part of May were consumed with tests, tests, and more tests: BRAC analysis, CT scans, x-rays, PET scan, bone scans and MRI. In case that’s not enough acronyms for ya, there was also the L-Dex and then the genomic typing of ER/PR positive and HER2 negative. More injections and blood draws than my poor left arm’s veins could keep up with (literally; there’s a permanent knot in the big vein). Countless appointments with the breast surgeon (Dr Dempsey, who is on the “nice” list) and plastic surgeon (Dr S, who may be on the naughty list), and 3 different oncologists.

Meanwhile, there was research to be done and crushing decisions to be made as I prepared for surgery. The phrase “life and death” took on a whole new meaning, sweet Santa. There’s a strange juxtaposition between packing school lunches and signing field trip permission slips while also filling out my medical directive and living will. I learned pretty fast how to act normal when everything around me had been turned upside down. I think, dear Santa, I also did a pretty good job of adjusting and adapting to the new normal. I think, fat man, I’m still doing a damn fine job of that. One quick look at my profile tells you that there most definitely is a new normal around here.

Santa baby, I was a good girl after the double mastectomy and the lymph node removal that left me battle-scarred and weary. I was an especially good girl in the face of the plethora of prescription drugs I could have used & abused. I was a diligent girl when it came to choosing green drink over Diet Coke, all-natural hormone-free yogurt over Blue Bell.

Santa, I was a brave and good girl when the nasty infection set up shop in my still-raw chest wall. I endured the 103-degree fevers, 22 days in the hospital, multiple tissue excisions and untold poking & prodding without much complaint. I missed the comforts of home, my dogs & my kids more than words can say, but I only cried twice. And even then, it was when no one else was around to see.

We don’t even need to recount the 18 days during which I was attached to the wound vac 24-7. I would really like, dear Santa, to permanently erase that memory from my grey matter, por favor. But I would like to remind you that I was a trouper during the home health days, and all those hours that were consumed with wound care and the administration of IV antibiotics. And while I’m at it, can I get a little shout-out for not killing Dr S, even though he probably deserved it?

Oh Santa, I do crave some credit for all the antibiotics I’ve endured — and continue to endure. From the Vancomycin to Cefapim, from the Cipro to the Zyvox, from the Biaxin to the Bactrim and Minocycline. Those last two will be part of my daily routine for a few months yet, but I’m already looking forward to the day in which I don’t have them on my kitchen counter anymore.

So Santa, how about we make a deal? I’ll set out all the milk & cookies you want in exchange for one little thing. All I want for Christmas is to have it easy for awhile.