This blog has been mighty serious lately. With topics like this and this and this, there’s been little room for the funnier things in life.

Time for that to change.

At least for today.

No doubt I’ll be up on my high horse again, ranting away about the evils of cancer or the lunacy of Rick Santorum or the despicable-ness of Rush Limbaugh.

Today is about smiling so hard my face hurts. About being in the company of girlfriends so funny and true. About belly laughs. About soaking up the sun and feeling the breeze.

To assist me in my pursuit of all things jovial, I present the latest list from my favorite girl: Five Things The Internet Loves. I’ve no idea why she wrote the list, or what spurred this bout of out-of-the-box creativity, but like the best things in life, it doesn’t matter. 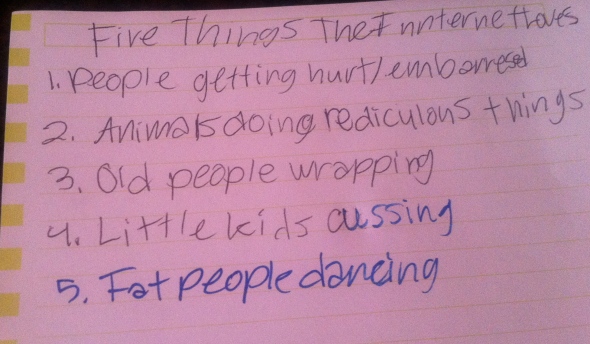 by my favorite girl

Her spelling is a bit off, but that doesn’t stop her from getting her message across:

Listen up, people: this is really important.

If you’re not familiar with The SCAR Project, I am happy to introduce you. I’ll be honest: there are some photos that may disturb you, because the photos show “large-scale portraits of young breast cancer survivors,” and present a “raw, unflinching face of early onset breast cancer while paying tribute to the courage and spirit of so many brave young women,” according to the project’s website. While the photos are indeed raw and unflinching themselves, I challenge you to man up and look at them anyway. They’re very tastefully done, no train-wreck gore or gratuitously scary stuff. Get past the cover model who is visibly pregnant and sporting a single-mastectomy scar on her chest. Her belly is beautiful, as it contains a newly forming life, and her scar is a badge of honor.

I like that little double entendre. Well, let’s be honest: I like most double entendres, but this one in particular speaks to me. As does the project’s media slogan: “Breast Cancer Is Not a Pink Ribbon.”

one of the many "pink ribbon" cards I've received

I’m all for the pink-it-up attitude that the Susan G Komen for the Cure and other organizations espouse. While I think it’s a little weird to see the pink ribbon and “awareness campaign” on products ranging from golf balls to toilet paper and all parts in between, and while I question how much all this awareness really does to actually fight the dreaded disease, I am grateful that Suzy Goodman Komen was the kind of woman who wanted to make a difference, even though she would not be a survivor. Because of her and her family, most notably her sister Nancy G. Brinker, breast cancer went from a shameful secret shrouded in secrecy to the glamour disease du jour.

I’m not interested in getting into the debate in the BC community over how much good the Komen organization has actually done. I completely understand the frustration felt by women with Stage IV BC over the lack of research done on their end of this vicious disease. According to Brinker’s book, Promise Me, the Komen organization has contributed some $1.5 billion to research and community programs, but it seems that precious little reaches the metastatic BC demographic.  I understand, and I struggle to see the connection between awareness and finding a cure. Regardless of funds and allocation, however, I’m grateful that in the 25+ years that Komen has been around, the global breast cancer movement has worked to eradicate the shame that used to accompany a BC diagnosis.  The SCAR Project is following suit.

As I’ve mentioned before, Bestselling author Barbara Delinsky also lost a loved one to BC. Delinsky was 8 years old when her mom died from BC, yet according to her book Uplift, she was in her teens before she learned that her mom had breast cancer, and it was years before her dad could say cancer, and even longer before he could say breast.

One of the women featured in Uplift, Elinor Farber, lost her mom to BC, too, and said when her mom was diagnosed 45 years ago, there were no mammograms, and mastectomies were just short of a butchering. Farber reports that her mom lived more than 30 years after her surgery, but never once spoke of her condition. “Mom endured everything without the support of friends and neighbors, who were not told. My sister and I were both told of my mom’s condition in hushed tones, and we were sworn to secrecy.”

But not until The SCAR Project have people been forced to see–I mean really see–the impact of breast cancer.

The project focuses on women aged 18 to 35, a demographic in the breast cancer community that is not well represented. Although it’s estimated that more than 100,00 women younger than 40 will be diagnosed with BC this year, and although BC is the #1 cause of death of women aged 18 to 40, the younger members of the pink ribbon club don’t get a lot of press.

When I was diagnosed last April at the tender young age of 40, I quickly learned just how little press we young-uns get. All of the literature I received from my darling breast surgeon featured grey-haired grannies. Not a single image in any literature showed anyone within 20 years of my age. My darling breast surgeon, who is younger than me, agreed that the lit needs a major overhaul, and she teased me about being the one to get the ball rolling. Sure thing. Now that I’m finally off the antibiotics and over the post-mastectomy infection, I’m on it.

Sadly, I’m too old for The SCAR Project; otherwise, I would sign up right this second to be a SCAR model. Well, not right this second but after living in the gym for several months and eating nothing but salad. No dressing. Kidding. After countless doctor visits and multiple hospital stays, I’ve long shed any modesty about disrobing, and I’ve been known to show my scars in all their glory to anyone who asks. The nurses in my various doctors’ offices don’t even offer me the paper gown anymore, because they know I won’t use it.  Save a tree, people; I’m over it. In fact, I may contact photographer David Jay and tell him I’m overage but have an abundance of scars. Way more than the women on the SCAR website. No that it’s a contest or anything.

Like Komen, the initial goal of The SCAR Project was to raise awareness and money. But it became so much more. Jay explains that he was not prepared for something so beautiful:

“For these young women, having their portrait taken seems to represent their personal victory over this terrifying disease. It helps them reclaim their sexuality, identity, and power after having been robbed of such an important part of it. Through these simple pictures, they seem to gain some acceptance of what has happened to them, and the strength to move forward with pride.”

Yeah! Go girls! This model from The SCAR Project looks like the epitome of a fierce survivor. While no doubt she’s battle-weary and has seen things and faced trials she never thought possible, the mere fact that she participated in The SCAR Project tells me that she is indeed moving forward with pride.

I’m not quite there yet, personally, with reclaiming all that has been lost to my cancer, but after seeing the women in The SCAR Project, I’m a whole lot closer.